Introduction
Now there are many funny things about Alice’s rabbit. One of them is that its lateness was self-imposed, and so it is with my feelings of running late. You would think by now I would have learned that the word “should” is a banned one, especially when it comes to things I enjoy doing such as writing this blog.  Sounds like more fodder for the analyst’s couch. I digress

When last we left the most recent sequence of walking reports, I was telling you about my trip to Lundbreck Falls.  On Friday (July 10), I drive along highway no. 3 past the Frank slide and onto Coleman.  Turtle Mountain (01) before the slide was over 400 ft. higher. In a little piece of serendipity I stop at the Burmis tree (02), which had been on my photo list. After the walk described below, I return to downtown Coleman and order a truly great clubhouse sandwich from Chris’ Restaurant.  My original plan was to drive home along the Forestry Trunk Road.  Instead, I return via highway no. 40 in the afternoon haze (03), past roads to be savoured another day (04).

Friday July 10 – Saskatoon Mountain Loop < 10.5 km – Counter Clockwise
The trail head is at Flumerfelt Park, which has Coleman’s contribution to “Big Things” (05).  The first three quarters of a kilometer or so is shared with a trail called the Miner’s Path, which follows a lyrical creek.  If fairies and nymphs exist, this is their home.  The gate hasn’t been closed in decades (06).  Today’s trail heads up from a waterfall (07).

I had read that the trail goes up quickly.  At one point it is nearly a scramble. I start to notice that my phone is loosing power faster than that scurrying rabbit, and I’m not carrying a topo map for this area.  It dawns on me that this is how walkers get into trouble.  There are roads to the east and south of me.  If I get turned around, I could walk down in either of those directions and make my way back to the truck.   I start to think about turning around and begin to hear voices ahead of me.  I catch up with the voices.  It is a family of 5 covering 3 generations. The granddaughter is in a child carrier on dad’s back.  They are doing the same trail in the same direction.  I ask if I can accompany them – they happily agree.  They are a family of walkers and campers, and I am conscious of maintaining their pace. It is not a photographer’s one.

We stop for lunch just off the mountain summit to escape the wind and look west towards Crowsnest Mountain (08). To the right of it (09) are all that remains from the Canadian Druids.  Stonehenge was just a draft.  By the time the Druids reached here, using pyramid power and sound waves they were able to build truly massive temples.  Lunch now over, we make the return leg of the loop.  Back at the waterfall I thank and say goodbye to my walking companions. I also thank them on April’s behalf.  I return to the truck at my easily distracted (10) pace.

Privacy Note: I did not ask permission to photograph the boy in the waterfall picture, and therefore I blurred his face in post-production so that he is not recognizable.

Aftermath: The phone was loosing power too quickly because it was constantly looking for a wi-fi signal.  I now put my phone on airplane mode while walking.  Downloaded maps are still usable and power is conserved. 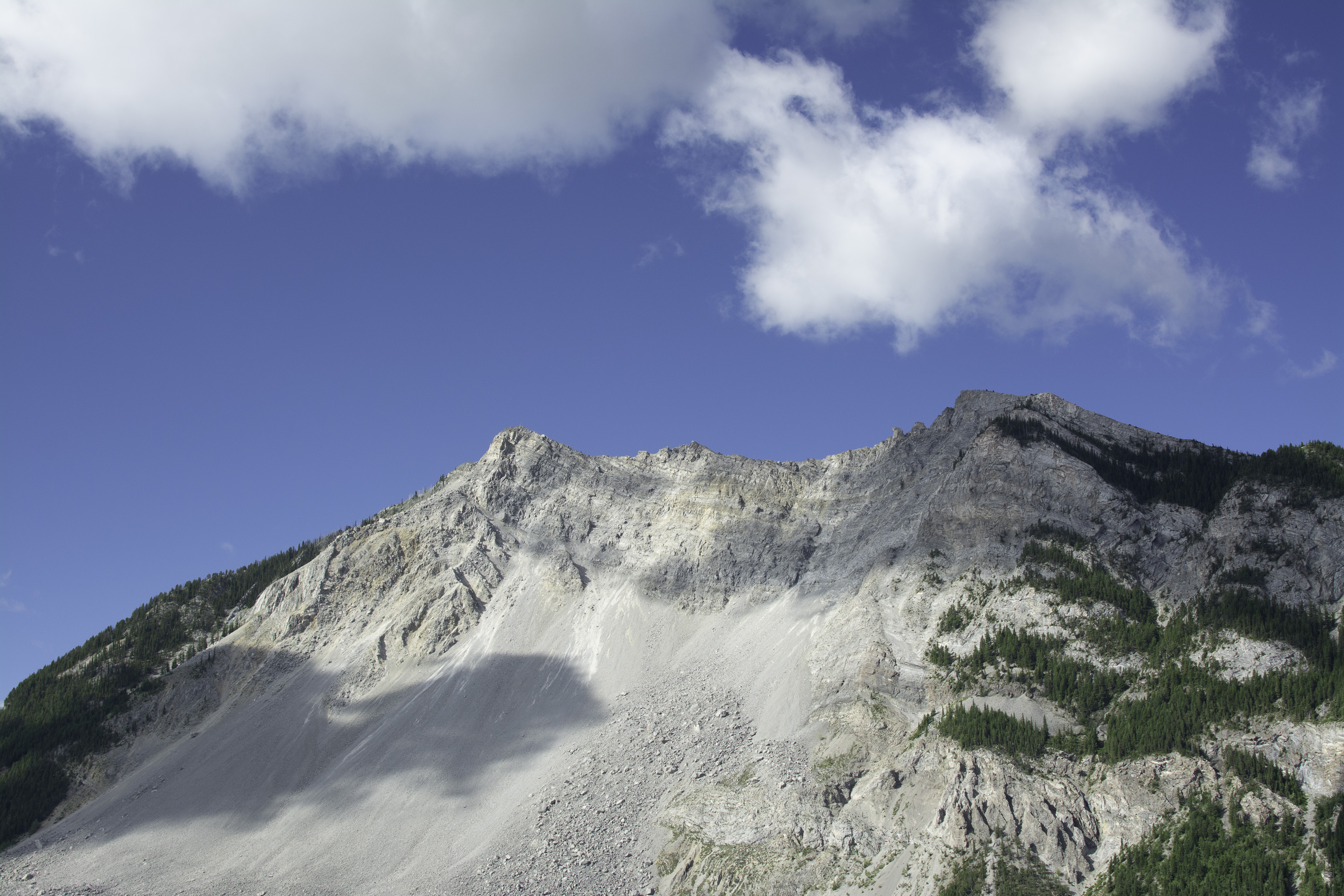 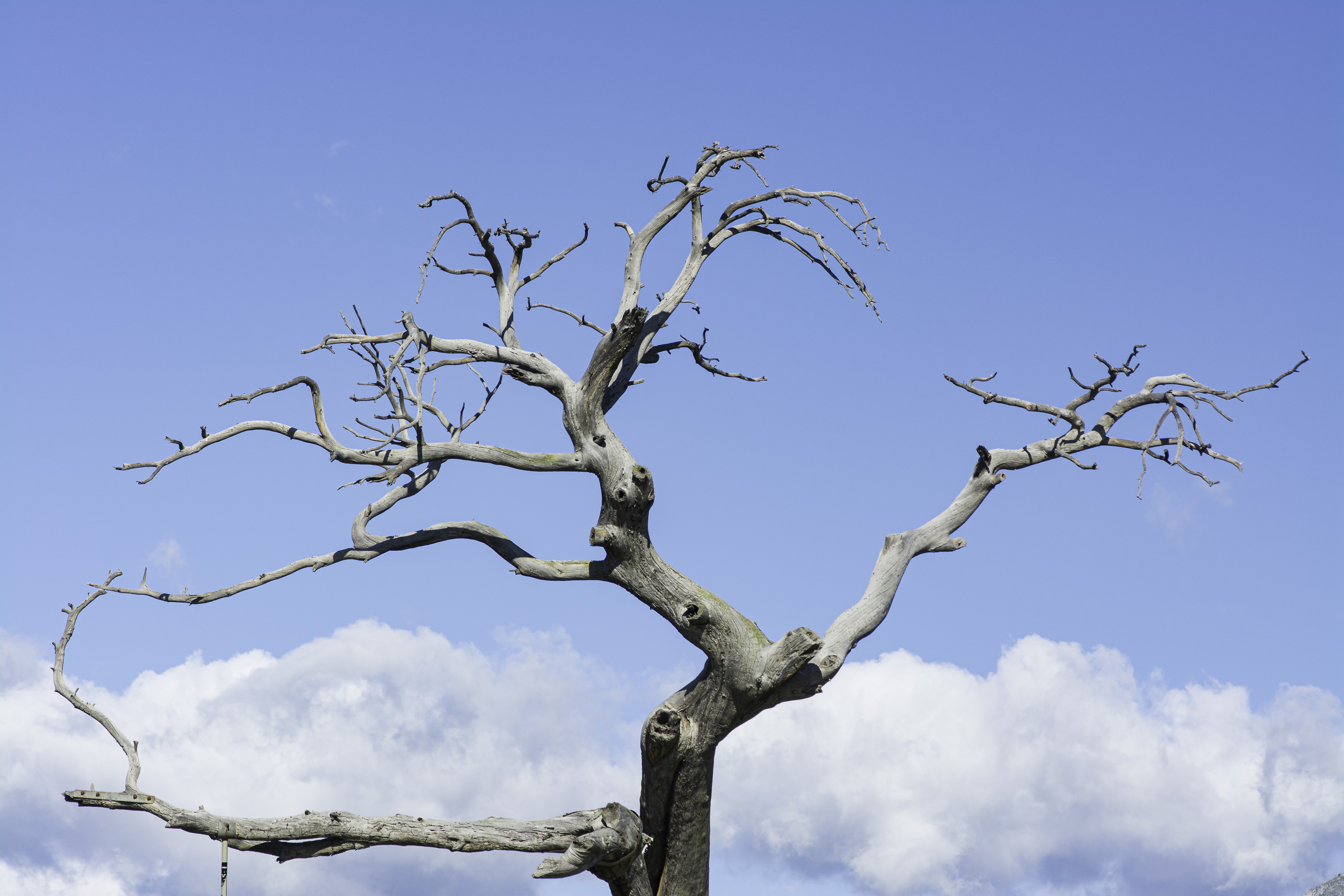 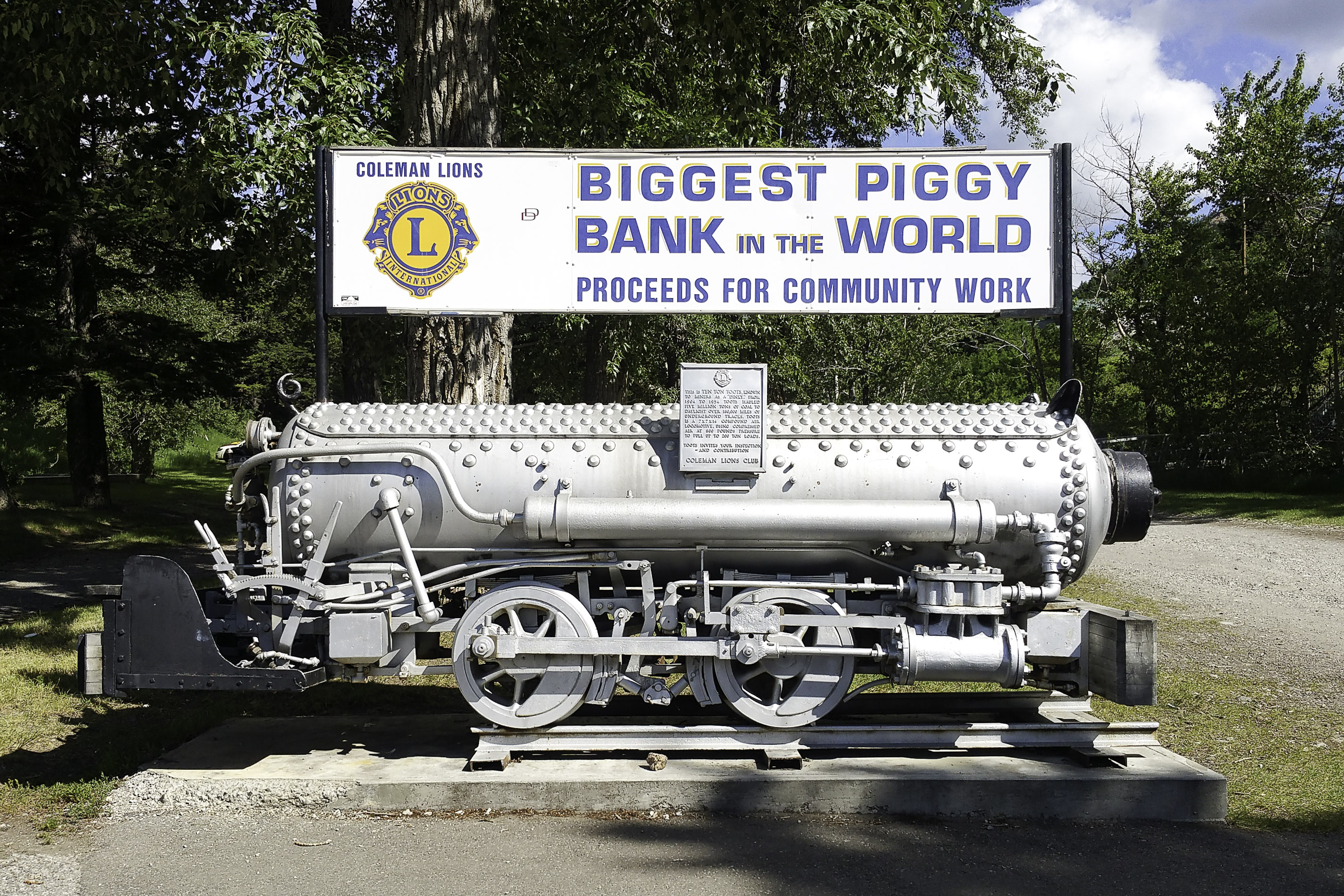 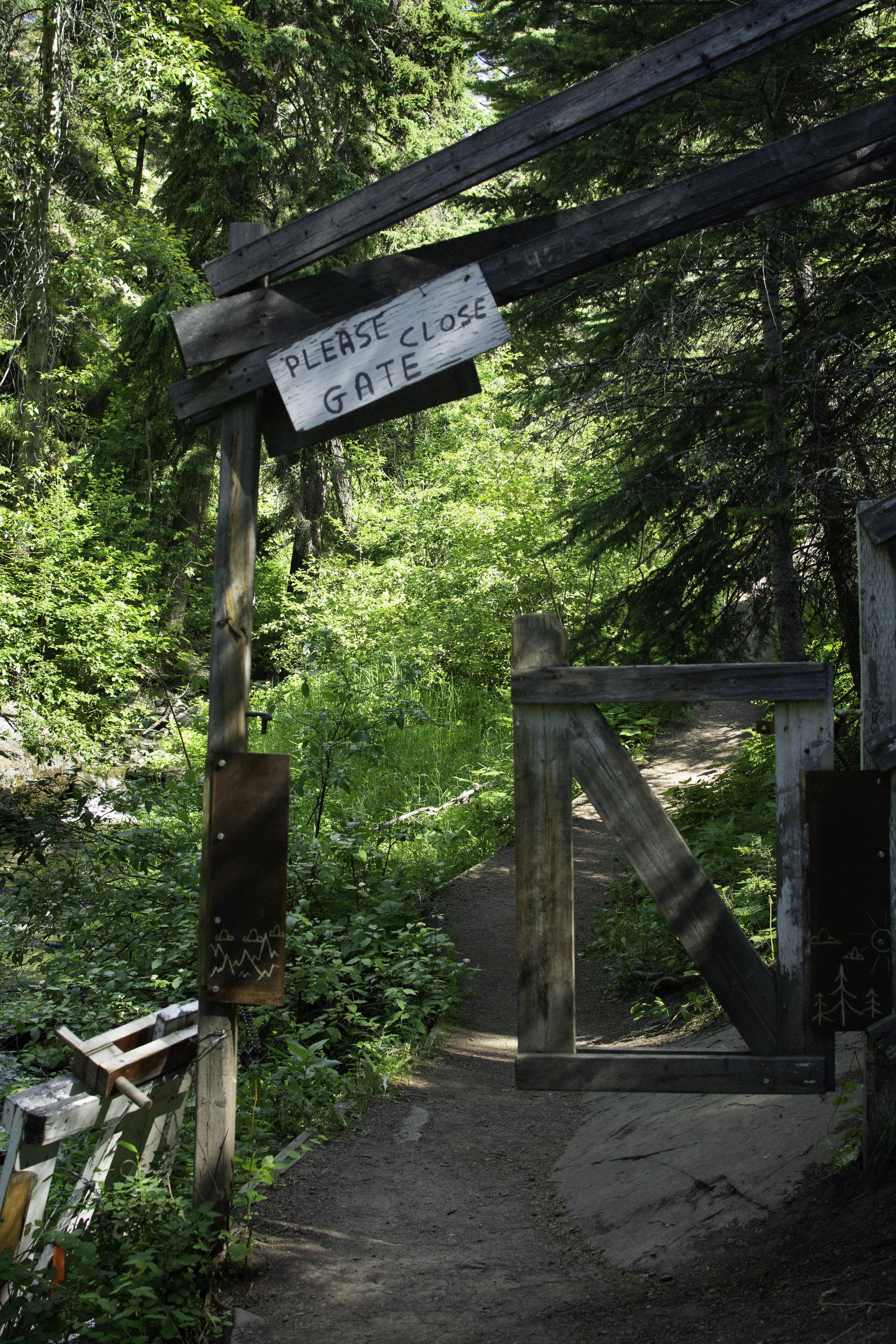 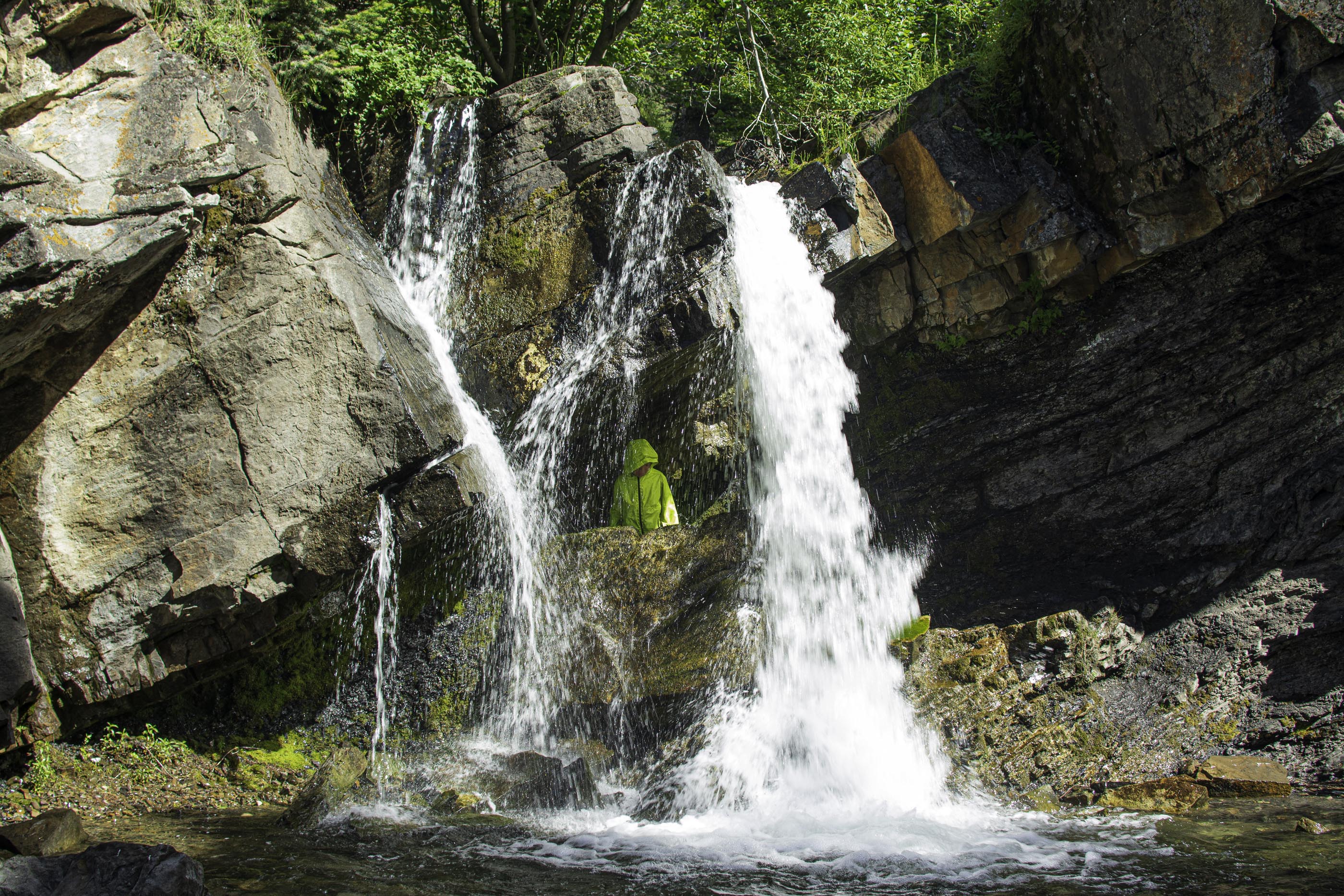 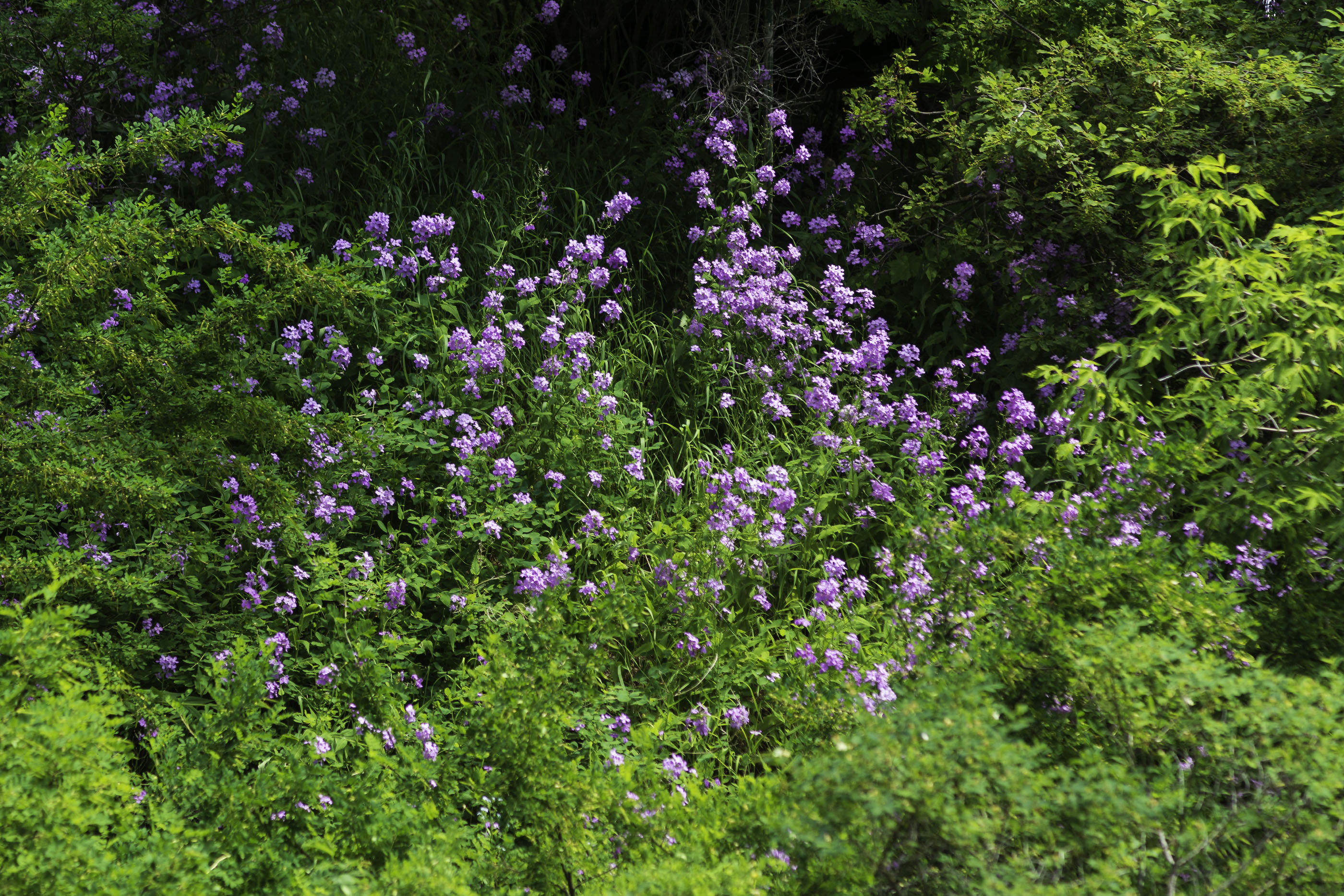 For the record
The Burmis Tree (Source: Roadside Attraction Information Plaque)
This limber pine has marked the eastern edge of Alberta’s Crowsnest Pass for an estimated seven centuries. Named the Burmis Tree after a coal-mining town that thrived here in the early 1900s, the tree has become a symbol of endurance for the people Of the Pass.

Limber pines have one of the longest life spans of any tree in Alberta. The trees grow and prosper in harsh conditions, places where other trees perish. Limber pine roots snake into cracks in the rocks. The branch tips are flexible, so strong winds shape rather than snap its branches.

The Burmis Tree died in the late 1970s. It lost the deep green needles and yellowy brown cones seen on other limber pines growing up this sandstone ridge. Birds such as the Clarks nutcracker, and other seed consumers, harvest cones containing seeds or cache them for later use. Young limber pines sprout in abandoned caches to begin their own battles with the relentless wind.

In 1998, the Burmis Tree lost its battle with the wind and toppled it to the ground. But members Of the Crowsnest community refused to leave it lying there. A partnership between the provincial government, the federal government, local businesses, community groups, and private citizens raised and stabilized the tree. Stainless steel brackets anchor the roots with rods drilled deep into the sandstone. A pipe inserted into the trunk gives support. Another support reduces the movement of the root section and can be tightened if the tree moves.

The Burmis Tree once again stands on its sandstone pedestal. greeting visitors to the Pass, and telling residents they are home.

2 Replies to “A Walking Report 10 with a Family”